All eight Cranleighans and Old Cranleighans (there may be more who slipped through the net) who ran the London Marathon completed the course and raised almost £16000 for charity. We are delighted to report that all eight Cranleighans and Old Cranleighans (there may be more who slipped through the net) who ran the London Marathon on April 23 completed the course and raised almost £16000 for charity.

Lewis Bedford (Cubitt 2017) knocked off an unbeaten 63 for the 1st XI against Eastbourne on Saturday before finishing the Marathon in 4 hours 45:40 raising £1630 for the Born Free Foundation.

Morgan Fletcher ran the course with his cousin 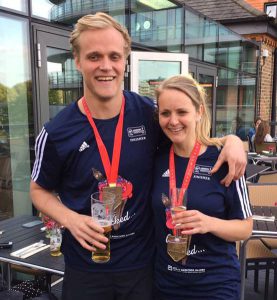 Ollie Dabbous (2&3 South 1999) is building on his huge successes in the London restaurant business. More... The bid by the catamaran ORCA 2 to row the Atlantic was abandoned less than 48 hours after setting off from Puerto de Mo… More...