For the first time the OCRFC played a match under the new floodlights which were installed on the far pitch at Thames Ditton over the summer. 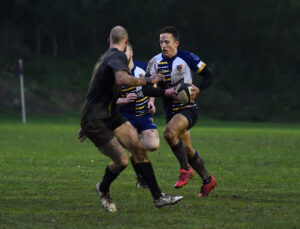 Although the league match against Winchester started on the main pitch, a serious injury caused the 1st XV game against Winchester to be switched to the second pitch after less than two minutes. The resulting delay meant that the match would have, in normal circumstances, finished in virtual darkness, so the lights were switched on at half-time.

The installation of the lights came as a result of increasing demand from the club’s hugely successful minis section.

“By extending the hours available to train and play, we are able to both improve the quantity of training time available for existing members and also expand the sections of the club designed to promote rugby to new participants, such as the mens’ and ladies’ touch rugby which is run on weekday evenings,” Will Fawcett, the OCRFC chairman, explained. “A significant part of the rugby season occurs during the shorter days of autumn and winter so adding floodlights to the pitch increases the space that can be used for these sessions and opens up options for a larger number of people to attend.”

The LED lights use the latest technology and as a result there is minimum light spillage, which benefits the local environment and minimises any impact on the surrounding area. They are also far more efficient than traditional halogen lights and use a fraction of the electricity.

The lights were funded by contributions from the OCRFC, the London Marathon Trust and the RFU. Red Bull Can You Make It 2020 Challenge

Can you travel across Europe in 7 days with Red Bull as your only currency? More... Remarkably, after many years without one, we have congratulated three OCs in the last two years on reaching their centuries More...